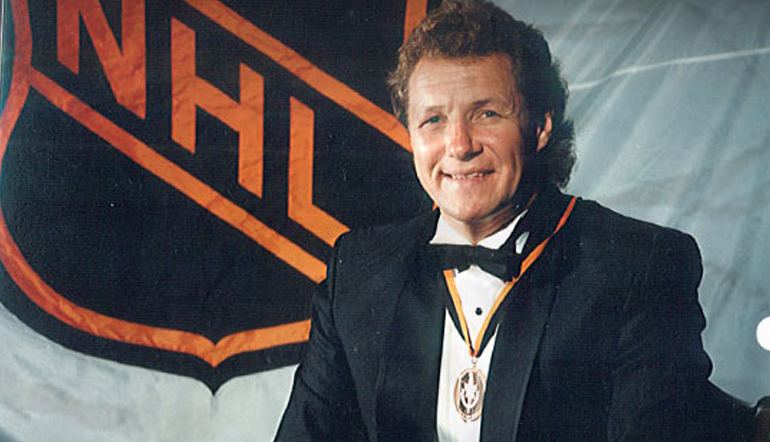 Darryl Sittler is one of the greatest players to ever wear the Toronto Maple Leaf uniform. The former centreman was Toronto's first choice in the 1970 Amateur Draft, and he embarked on a career that led him to the top of the Leafs' All-Time Points and Goal Scoring List.

The native of Kitchener, Ontario may well be remembered for two of the most historical performances in the history of the National Hockey League. On February 7, 1976, Sittler scored six goals and added four assists for an NHL record total of 10 points in a game versus the Boston Bruins at Maple Leaf Gardens. That spring, the team leader joined Maurice Richard in hockey history by recording five goals in one playoff game against the Philadelphia Flyers. Darryl's place among the sport's all-time greats came in 1989 with his induction into the Hockey Hall of Fame and in 1995-96, Darryl was voted by fans as the centreman on the All-Time Leafs Team.

After hanging up his skates, Darryl took on a new professional role as special consultant to the President of the Toronto Maple Leafs, in the areas of marketing, public relations, alumni relations and hockey operations. He is now a marketing and community consultant. Darryl's place among the NHL's all-time greats came in 1989 with his induction into the Hockey Hall of Fame. In 1995-96, Darryl was voted by fans as the centreman on the All-Time Leafs Team, and on February 8, 2003, Toronto retired Sittler's No. 27.

What Darryl Sittler Talks About:

Share an evening with Darryl Sittler and you will give your audience an experience they won’t forget. Focusing on a few key issues — the development of coaching as a leadership skill, the influence of great management in maximizing performance potential, and the creation and maintenance of great teams — Darryl relates his experiences of becoming one of the top performers in his field to those of his audience in their business and personal lives.

Darryl’s presentation themes include the development of coaching as a leadership skill in business; the influence of great management in maximizing performance potential; and the creation and maintenance of great teams.

‘Darryl was GREAT!!! A terrific guy! Very professional and personable. His experience at doing this type of thing was clearly evident simply by some of the little things he did, such as making sure that visitors got their best pose for the camera, especially with kids. He didn’t limit his signings to our booth — he’d easily stop and sign and pose for photos wherever he went at the site. He’d easily shift gears to do a quick media interview where he excelled — again, good quotes, great stories, good-natured give-and-take with some of the media people especially. I had the privilege of introducing him on Sunday and sincerely meant it when we referred to him as ‘a great Leaf, a great Captain and a great gentleman.’ …It was terrific having him — a laid back, down to earth, a gentleman… Our people here were very impressed with him. Thanks to you and Darryl.’

Darryl was GREAT!!! A terrific guy! Very professional and personable. Our people here were very impressed with him.