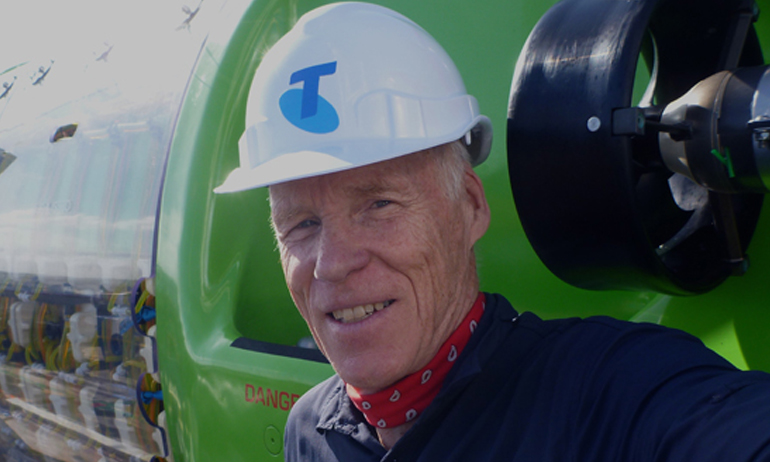 Dr. Joe is a medical doctor, author and storyteller who’s pioneering research on undersea science and engineering projects earned him his nation’s highest honour—the Order of Canada. He has shared his hard-won knowledge about deep leadership and team genius with more than three hundred Fortune 500 audiences.

Supported by the Canadian government, Dr. Joe led ten research expeditions under the Arctic Ocean. The first person to explore the freezing waters beneath the North Pole, he was among the first to dive to the Titanic. Recently, he was a medical advisor and journalist on the James Cameron-National Geographic seven-mile, science dive into the Mariana Trench.

He has written nine books. His latest, Deep Leadership: Essential Insights from High Risk Environments, was published by Random House.

What Dr. Joe MacInnis Talks About:

Deep Leadership: How to be a Better, Faster Leader
Dr. Joe was the team leader on two $5-million engineering projects beneath the Arctic and Atlantic Oceans. His latest book, Deep Leadership: Essential Insights from High-Risk Environments was based on his experiences on undersea engineering projects and interviews with shuttle astronauts and soldiers serving in Afghanistan. In this visually-driven presentation, he uses dramatic stories to distill what he learned about strategic imagination, the power of language, the strength of stamina and how these three principles make you a better, faster leader in your office or workplace.

Team Genius: How to Accelerate the Genius in your Team
Dr. Joe has worked on high-risk undersea engineering projects with teams from the US Navy, the French and Canadian governments and the Russian Academy of Sciences. In this visually-driven presentation he reveals the team genius needed to pilot a research sub three miles under the ocean, work on a Canadian Special Forces team and spacewalk on the International Space Station. He uses the $30-million James Cameron-National Geographic science dive into the Mariana Trench to examine the primary principles of team genius: deep empathy, deep eloquence and deep endurance and how to use them to accelerate your team’s genius.

Titantic Dreams: The Opposite of Safety
Dr. Joe was the co-leader of a $5-million Imax film expedition to the Titanic and has made two 4|000 metre dives to the Mount Everest of shipwrecks. He was the journalist on James Cameron’s $7-million live-from-the-Titanic broadcast for the Discovery Channel. In this visually-driven presentation, he shows how going too fast . . .ignoring iceberg warnings . . . locking up the binoculars . . . making the wrong turn . . . are metaphors for safety and performance issues in our personal and professional lives. Using real-life examples, he warns against false assumptions, creeping complacency and reveals how vigilance and persistence accelerate safety.

Your brought character, insight, experience and wisdom to the audience. Everyone enjoyed the session tremendously.