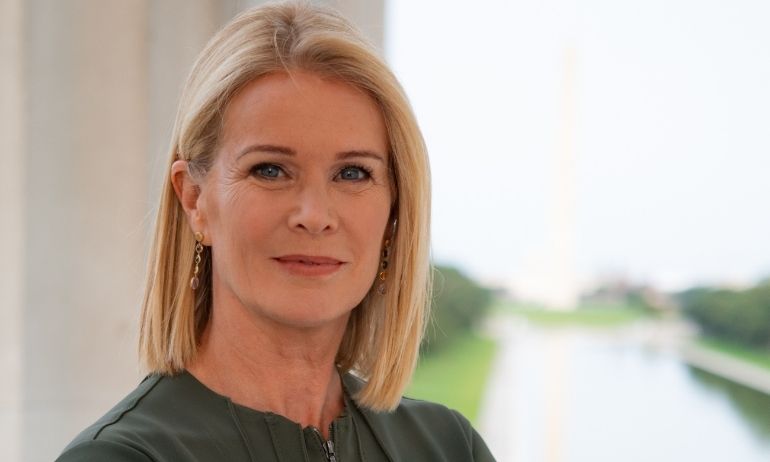 Katty Kay is an award-winning journalist and news anchor who brings an instinctively global perspective to her observations on American politics and global affairs – a result of having grown-up living and traveling all over the Middle East, as well as reporting from Africa, Asia, Europe, the Middle East, and the U.S. throughout her career. During her nearly 30-years with BBC News, she was a reporter and then news anchor, bringing important news from America and around the world to a huge global audience from her studio in Washington, D.C. Katty has reported on six U.S. presidential elections, Washington politics, financial crashes, world trouble spots, sex scandals, global affairs, and much more. She is a regular contributor and substitute host of Morning Joe on MSNBC. Katty also writes on the art and science of self-assurance in women and girls. She is co-author, with Claire Shipman, of four New York Times’ bestselling books: Womenomics,  The Confidence Code, The Confidence Code for Girls, and Living the Confidence Code. Katty is an engaging keynote speaker on a wide range of topics as well as a brilliant moderator, interviewer, and host –for both in-person and virtual events.

Helping women turn thoughts into action and master a more confident mindset is one of Katty’s passions. She is co-author of five books with Claire Shipman, including four New York Times bestsellers – two were #1. Their first two bestsellers focus on women, success, and work. Womenomics: Write Your Own Rules for Success examined the workplace revolution and inspired women to take control, dream big and discover a different way of weaving work into their lives – and in the process create more profitable companies with happier and more productive employees. They followed up with The Confidence Code: The Science and Art of Self-Assurance—What Women Should Know, which inspired women to understand that confidence –the lynchpin of success –is a choice.

After The Confidence Code was released, parents everywhere asked about confidence and girls. That led to three more books co-authored by Katty with Claire Shipman and Jill Ellyn Riley. The Confidence Code for Girls: Taking Risks, Messing Up, and Becoming Your Amazingly Imperfect, Totally Powerful Self, was released in April 2018 and debuted at the #1 spot on The New York Times bestseller list. The empowering, entertaining guide gives girls the essential yet elusive code to becoming bold, brave, and fearless. The follow-up, The Confidence Code for Girls Journal: A Guide to Embracing Your Amazingly Imperfect, Totally Powerful Self, is based on their in-depth research and helps teens and tweens tackle any challenge. Their most recent book, Living the Confidence Code: Real Girls, Real Stories, Real Confidence, debuted at #1 on The New York Times bestseller list (Children’s Middle Grade) and is a collection of 30 true stories of real girls pursuing their passions, struggling and stumbling, but along the way figuring out how to build their own special brand of confidence. Katty and Claire are currently co-authoring their sixth book.

On the fun side, Katty had the distinction of being immortalized in pop culture in 2018 when her name was the answer to a question on the Jeopardy game show. In the same week, she was portrayed in a skit on Saturday Night Live which satirized a moment from MSNBC’s Morning Joe program. Katty Kay settled in Washington, DC in the mid-90s where she lives with her husband, two cats, and a dog. They have four grown children.

What Katty Kay Talks About:

A Global Update
The world can change in an instant. The pandemic decimated economies, increased nationalism, and raised internal tensions in America and most developed countries. Leaders and political systems were under the spotlight and authoritarian politicians used the crisis to seize control. Most recently, Russia’s invasion of Ukraine initiated a global response the likes of which we’ve not seen since WWII. The shift in the global power structure cannot be overestimated. What’s next? How will China factor into this? Katty Kay has reported on the drivers of global political change for over three decades. As a Brit who’s lived and worked on four continents, Katty brings her instinctively global perspective to audiences – unpacking insights to help them understand more clearly the forces at play around the world and their likely impact.

Washington From a Different Angle
The presidency of Donald Trump has turned the political world upside-down – in America and around the world. President Trump’s way of doing things is unconventional – and that’s going down well in some quarters; not so well in others. And it doesn’t fall just along party lines. How is it playing out? What’s next? What do administration insiders say in private moments? What’s going on inside the White House? How does the rest of the world view all this? With divided government in Washington, can anything get done? How will the 2020 race for the presidency shape up – who are the candidates and what are the issues? As a British journalist in Washington, DC, Katty Kay looks at Washington from a different angle. She offers a perspective on American politics that only an outsider can provide. The veteran BBC anchor has the experience and sources to uncover the story behind the headlines and provide valuable context for her audience. Katty tailors this speech to suit the interests of each audience – delivering solid insights with charm and understated humor.

The Confidence Code
Confidence! With it, we can take on the world; without it, we don’t ask for raises, request that important meeting or take risks. In the success equation, research shows that confidence is even more critical than competence. But what is confidence? Where does it come from? Are we born with it or do we acquire it? And why do women have less of it than their talents deserve? This speech can be tailored to women or girls/parents and is based on Katty’s two best-selling books on the subject. Katty Kay inspires audiences with the latest scientific research and anecdotes from her own career and the many women and girls she interviewed. “Neurologists have isolated a ‘confidence gene|’” says Katty “and when I was tested, I learned I am not genetically predisposed to being confident.” Her experience is like that of so many women, even senior women, whose lack of confidence is what really holds them back. But confidence is also art – impacted by how we choose to live with our genes. The good news then is that being confident is a choice. Katty’s talk inspires audiences to take action – to go outside their comfort zones, to try new hard things, to take risks, to be prepared to fail and to discover the secret to success.

Womenomics
At the World Economic Forum in Davos, IMF Chief Christine Lagarde called the advancement of women the greatest economic opportunity of our time. She was recognizing what Katty Kay calls Womenomics, the extraordinary value of women in the workforce. Global studies show that companies who employ more senior women make more money. But too many women in their mid-thirties hit the brick wall of kids vs. career and decide to leave the workforce. We can’t afford to keep losing them. Katty marshals evidence from employers large and small to show how it’s possible to help women meet the demands of family and career and keep these valuable contributors in the workforce. What starts as a talent retention initiative becomes a profit bonus any company would be happy to have. Katty’s talk inspires women and provides a practical guide to employers.

Moderator, Discussion Leader & Interviewer
Katty Kay has interviewed scores of political dignitaries and business leaders for her news broadcasts and at top live events. The skills, grace and humor she brings to the live stage as a panel moderator, discussion leader and interviewer help create memorable experience for the audience.

Everyone was crazy about Katty. They loved her message and her delivery. I think Katty has converted many of the attendees to BBC News.