You’re More Creative Than You Think

By Josh Linkner – Speaker on Creativity, Innovation, and Leadership

In a recent experiment at the University of Sydney in Australia, neuroscientists gave 128 volunteers a puzzle to solve that can only be conquered with creativity. The subjects were asked to connect nine dots, arranged in three rows of three, using just four straight lines and without lifting their pens. This is a classic creativity test, since solving it literally requires a person to think outside the box. (Fun fact: this test is the origin of the phrase “think outside the box.”) The only way to complete the puzzle is to draw lines far outside the three-by-three dot pattern, dramatically swooping in and out of the box of dots. 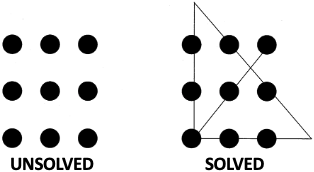 In the first trial, all 128 subjects failed the test. Researchers then used a transcranial direct current stimulation (tDCS) to temporarily immobilize the part of our brain that is responsible for our ‘filter’. It’s the brain region that your uncle Jim turns off at holiday dinners to the embarrassment of all.

The result of the Sydney experiment? More than 40 percent of the participants were able to solve the problem correctly within minutes after the electrical current deactivated the part of the brain that controls self-regulation, fear, and impulse-control. In other words, the creativity was there all along. When barriers are removed, imagination flourishes.

It’s a tragedy that most adults don’t feel all that creative. We equate job title or training with levels of creativity, thinking that sculptors are creative, but accountants are not. Perhaps it’s the lingering voice of a parent, teacher, or boss whispering in our ears that “you’re just not a creative person.” While the Sydney study demonstrates that neuroscience proves otherwise, most of us still reach the incorrect conclusion that we just aren’t very creative.

A 2020 Israeli study shows how deeply the anti-creative bias runs. Researchers asked 61 undergraduate students to participate in a series of divergent thinking tests, and then self-rank their creative abilities.  The originality of the student’s ideas was evaluated separately by a panel of experts and then compared to the scores the participants gave themselves. The study found “a strong and statistically significant bias towards an underestimation of the originality of one’s own ideas.” This shows how strongly we tend to underestimate our own creativity. A series of follow-up experiments were performed with the same conclusion reached: “participants severely underestimated the creativity of their own ideas.”

The fact that we don’t always feel creative has nothing to do with our actual creative potential. The science is clear that the powerful force of human creativity is inside each of us; it’s our job to liberate, develop, and enjoy it.

When we harness dormant creativity, we’re able to conquer our pesky challenges and seize our biggest opportunities. Your vault of creativity is waiting for you to unlock it. A little focus and practice will go a long way toward cracking the code.

Josh Linkner – who started his career as a jazz guitarist – personifies innovation, entrepreneurship, and breakthrough disruption. He has been the founder and CEO of five tech companies, which sold for a combined value of over $200 million, and helps leaders successfully address critical challenges. Josh is a New York Times best-selling author, and an internationally recognized expert on innovation and applied creativity. His first book, Disciplined Dreaming: A Proven System to Drive Breakthrough Creativity (2011), became one of the most definitive works on the topic of innovation, and has since been published in 13 languages. His other two books, The Road to Reinvention: How to Drive Disruption and Accelerate Transformation (2014), and Hacking Innovation: The New Growth Model from the Sinister World of Hackers (2017), have both received critical acclaim and have pushed the boundaries of business leaders worldwide.