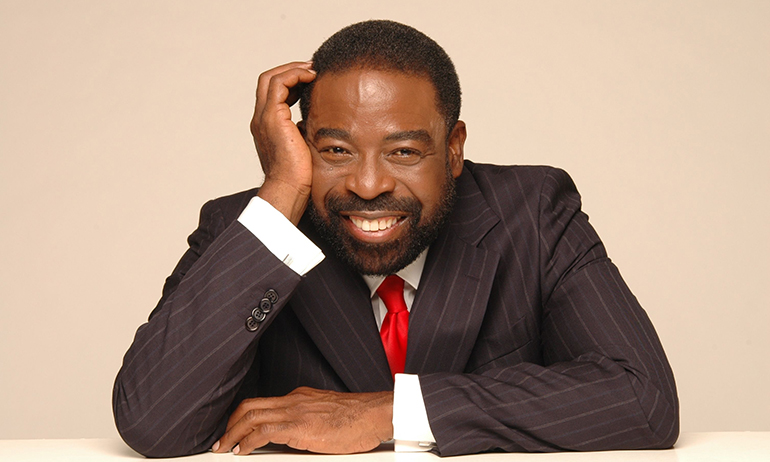 As a renowned author, speaker, television and radio personality, Les Brown has risen to national prominence by inspiring others to shake off mediocrity and live up to their full potential. With no formal education beyond high school, Les has distinguished himself as an international authority on harnessing human potential.

Born a twin in low-income Liberty City in Miami, Florida, Les and his twin brother were adopted when they were six weeks old by Miss Mamie Brown. As a single woman with a big heart, Miss Brown had very little education or financial means. With young Les' inattention to school work, his restless energy, and the failure of his teachers to recognize his potential, Les was misdiagnosed as educable mentally retarded. Suffering for years by the label and the stigma, Les was nevertheless driven by his passion to learn and his hunger to achieve his goal as a radio disc jockey.

In a humorous twist of fate and cunning, Les rose from a hip-talkin' morning DJ to a broadcast manager; from voracious reader to author; from community activist to community leader; from political commentator to three-term state legislator; from a banquet and nightclub emcee to a premier keynote speaker for Fortune 100 companies.

In 1989, Les received the National Speakers Association's highest honor: The Council of Peers Award for Excellence (CPAE). In addition, he was selected one of the World's Top Five Speakers in 1992 by Toastmasters International and became the recipient of the Golden Gavel Award.

Commencing in 1990 and recording the first in a series of six PBS specials, Les launched You Deserve which was awarded a Chicago-area Emmy. It became the leading fundraiser for pledges to PBS stations nationwide.

In 1993, Les became the host of his own nationally syndicated daily television talk show, The Les Brown Show, in which he focused on solutions to the day's challenges rather than the problems.

Recognized internationally, Les is the author of three bestselling books: Up Thoughts for Down Times, Live Your Dreams, and It's Not Over Until You Win. With his Sunday morning radio talk show, Chicago Speaks with Les Brown, Les' outreach embraces the homeless and the world's most powerful leaders.

A leading authority in understanding and stimulating human potential, Les' electric and powerful delivery, stage presence and personal insights have built his international brand of "What's Possible". Les' customized presentation is driven by his approach to each unique audience. Before he gives a speech, he builds a speech. The end result is that Les teaches and inspires each audience to new levels of awareness and achievement.

What Les Brown Talks About:

You’ve Got to be Hungry
In efforts to achieve at the highest level, Les says, you have to be untiring, relentlessly huunnngry! In challenging audiences to reach, Les tells his own story of achievement over the odds, and when asked, tells his famous deejay story, recounting how he broke into broadcasting.

Achieving at the Next Level
Les outlines the all-essential mindset for high-level achievement, which begins with making the case that such achievement is possible. Once it is established that the goal, though difficult, is at least possible, Les sets the course for the frame of mind it takes to actually achieve at higher and higher levels.

Live Your Dreams Now
In the early ’90s Les published his best-selling book, Live Your Dreams. Now, having faced health challenges in his own life and losing a best friend, Les warns against putting dreams on the back burner. Les challenges companies and individuals to get going on their goals and dreams, because they are the stuff life is made of.

Presentation Skills
Become a powerful speaker by mastering the art of storytelling. The mechanics of delivering a dynamic speech to each audience you stand before. Learn to listen to the listening of your audience to ensure that your speech is delivering what your audience needs to hear.

It’s Not Over Till You Win! Based on his Best Selling book of the same name, It’s Not Over Until You Win
How to Become the Person You Always Wanted to Be No Matter What the Obstacle.

Sell with Your Story
Les Brown is America’s Sales Guru. In his exciting session he will reveal the secrets to MAXIMIZING your sales potential! Les will teach you how to prosper for a lifetime – in virtually any industry and in ANY economy!

I can't tell you how much it means to us to have someone like yourself speak at our seminar. You truly exemplify the meaning of SUCCESS!