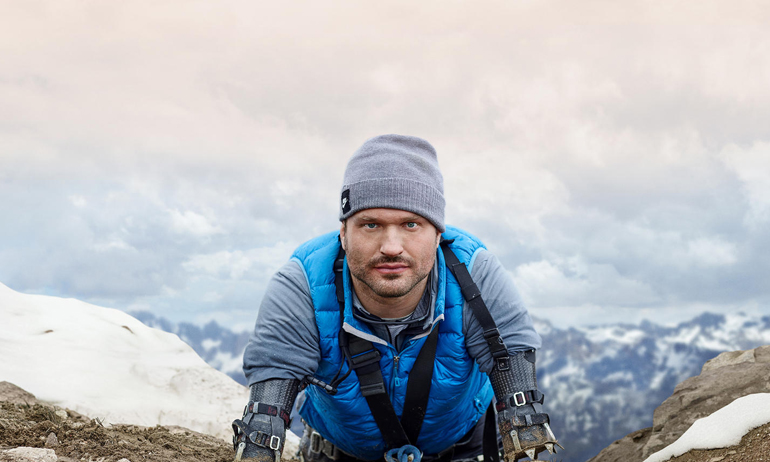 Despite being born with a rare condition known as congenital amputation, that has left him with arms that end at the elbows and legs that end near his knees, he learned early on, and with the support of his family, to live life independently and without prosthetics. Kyle thrives on physical challenges and following a few rough, middle school football seasons, he went on to become a champion wrestler, CrossFit Certified Instructor and gym owner, competitive MMA/Brazilian Jiu-Jitsu fighter, world record-setting weightlifter, and skilled mountaineer.

In 2012, Kyle became the first quadruple amputee to climb – actually bearcrawl – the 19,340 feet to the top of Mount Kilimanjaro without the aid of prosthetics. His 10-day ascent was widely covered by the press, followed on social media, and raised money and awareness for wounded veterans as well as Tanzanian schoolchildren. Upon his return, Kyle won his second ESPY (Excellence in Sports Performance Yearly) award for Best Male Athlete with a Disability.

Four years later, he reached the summit of Argentina’s breathtakingly beautiful, and sometimes deadly, Mount Aconcagua – the highest peak in both the Western and Southern Hemispheres, standing at 22,838 feet. Following that epic summit, Nike featured Kyle in the powerful commercial “Unlimited Will,” which debuted globally during the 2016 Olympics, was viewed by millions around the world – as part of the series that AdWeek named the most memorable of all commercials during the 2016 Olympics.

Kyle proudly serves as a board member of K2 Adventure Foundation, and as an ambassador of No Barriers USA, Wounded Warrior Project, the USO, the Travis Manion Foundation, the U.S. Special Forces’ The Honor Foundation (THF), and the Juvenile Diabetes Research Foundation International (JDRF). He has also spent some of his most memorable moments meeting with recovering U.S. military veterans at Walter Reed Medical Center, and supporting service events for Air Force Academy and Navy SEAL Qualification Trainee programs, as well as to servicemen and women at Camp Pendleton, Ft. Benning, Ft. Bragg, Ft. Leavenworth, Ft. Lewis and Ft. Myer.

He has appeared as a guest on Good Morning America, CBS The Early Show, The Oprah Winfrey Show, Larry King Live, ABC's 20/20, and his story has been featured on ESPN’s Sportscenter, HBO`s Real Sports, and CNN’s Great Big Story, as well as other countless television shows and editorials.

Kyle was also the focus of the moving documentary, “A Fighting Chance,” which chronicled his life and the pursuit of his first Mixed Martial Arts cage fight – which was produced by ESPN Films & SnagFilms and premiered on ESPN in 2010 and can currently be found on Netflix – with film sales proceeds benefitting injured armed forces veterans. At age 19, Kyle authored his account of his life experiences in The New York Times bestselling book, “No Excuses” (2005), which is still in print and in demand today.

What Kyle Maynard Talks About:

No Excuses
Kyle has not let his success be defined by anything or anyone but himself. He has lived his life striving to do more, learn more, push harder, go further – and to inspire others to do the same by sharing his story and living by example. As a motivational speaker, he shares his story and tailors his speeches to his audience. His messages are centered on building a life driven by purpose and meaning, the importance of the undying pursuit of dreams, and the belief that no obstacle is too great and nothing in their lives can keep them from accomplishing their goals.

With a mission to inspire, Kyle travels more than 200 days annually, across continents, speaking to hundreds of public and private schools and universities, events and conventions, and the many corporations that hire him, to share his “No Excuses” philosophy and principles. He has shared the stage with the world`s greatest minds spanning business, sports, and motivation, and works with executives at Fortune 100 companies such as Microsoft, Pfizer, Merrill Lynch, Bank of America, Wells Fargo, State Farm, Nationwide, Humana Inc., Cigna, and The Coca-Cola Company.

Simply put, Kyle was amazing! He was so inspirational, his storytelling was spot-on and he managed to connect with everyone of all ages equally.