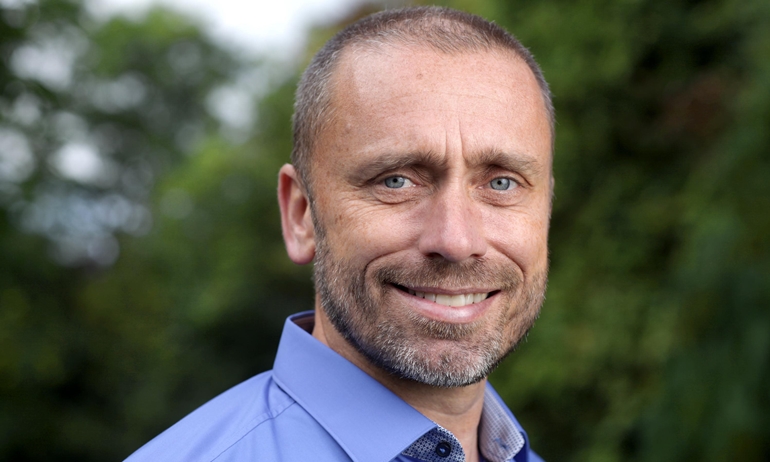 Marc Woods competed internationally as a swimmer for 17 years; winning 12 Paralympic medals from 5

Games and a further 21 from either World or European Championships. In the past he has held world records

100m Freestyle. At the London 2012 Paralympic Games worked for the BBC as a commentator and presenter, as

well as performing in the opening ceremony.

Marc now spends his time presenting at business conference around the world. His speech takes you on an
inspirational journey - giving insights into personal

responsibility, leadership, teamwork and motivation. It is a journey that took him from cancer patient to multiple Gold

medallist. Along with some of the personnel now working with British Cycling he was a pioneer of the

Marc has written three books. Most notably Personal Best, a combination of his

inspirational life story and personal development advice, and more recently Beyond the Call, which

supported by research from New York University, looks at how to create conditions within an organisation

Amongst other things he is an ambassador of Teenage Cancer Trust, a director of the Youth Sport Trust and

His clients come from all business sectors and include IBM, Pfizer, Sainsbury, O2 and Santander.

What Marc Woods Talks About:

Marc had his left leg amputated because of cancer when he was just seventeen years old, He had been a
county swimmer before the diagnosis and the day after he had his stitches out he went swimming again.
Within a year he was swimming quicker with one leg then he did when he had two.

His dream was to simply be the best that he could be and just 18 months after he finished his
chemotherapy he was selected to represent Great Britain. He subsequently competed at European & World
Championships and Paralympic Games. In his 17 years of competition he won a staggering 12 Paralympic
medals from 5 Games, 4 of those medals being gold.

As a teenager Marc would describe himself as lazy. Faced with a daunting situation he took personal
responsibility to get on with his life to the best of his ability. In his presentation Marc describes
having to learn to walk again and how taking the time to do that as well as he possibly could still
positively impacts on his life today.

During his presentation Marc plays a video of his thrilling relay race in Atlanta where the team came
from seven meters behind only to lose by twelve one hundredths of a second, The gold medal was within
touching distance… and then it was gone.

After reviewing everything it wasn’t until Marc watched the video of the race that he noticed something,
There they were all four of the team in he medal podium; two with beaming smiles on their faces; two
looking devastated. It was then that he realised what was wrong. They had competed as four individuals
and not as a team. Two wanted to win and two were happy with 2nd or 3rd.

Following this disappointment Marc describes how a culture of teamwork was developed and in the second
clip which Marc plays the team comes through to win the gold in Sydney. He also describes how the notion
that everyone gas a role to play in winning, regardless what their day to day job, was communicated to the
broader support team and how this ensured a further Gold medal in Athens.

When Marc was first asked to lead the team he willingly did it but it was only through making mistakes
that he realised that he needed to develop his leadership and communication skills. In particular he
needed to improve his listening skills and thereby his ability to obtain buy-in from his team mates. Marc
describes turning a dysfunctional team around by creating an open environment where people were
passionate about being the best that they could be.

Motivation and inspiration are a given within this presentation. Marc speaks with passion, humour and
humility. Utilising superb BBC TV footage his story takes the delegates on a journey from cancer patient
to multiple medal winner.

Marc's story is itself remarkable, but the way he draws out so many personal and professional parallels in such an entertaining way means that the audience's attention is 100% all the way through. I think every one of the 400 of our staff who attended gained something personally and I can see our company growing stronger as a result.